The Summertime In Hell Tour is the third concert tour featuring Nicole Dollanganger. The tour was announced on June 1, 2016. The tour began on August 3, 2016 in New York City, NY.

The tour was announced with 25 confirmed dates across North America. The two headlining acts for all of the dates were Elvis Depressedly and Teen Suicide. The band members playing alongside Dollanganger on this tour were Matt Tomasi, Dan Darrah, and Leigh Fisk. Very early on Nicole came down laryngitis which resulted in many performances being canceled; however, she still went to the shows to meet fans.

The setlist varied from date to date, but in total is composed of songs: . 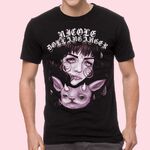 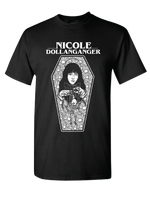 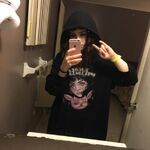 "Tear Drop Hoodie"
Add a photo to this gallery
Retrieved from "https://nicoledollanganger.fandom.com/wiki/Summertime_In_Hell_Tour?oldid=1359"
Community content is available under CC-BY-SA unless otherwise noted.